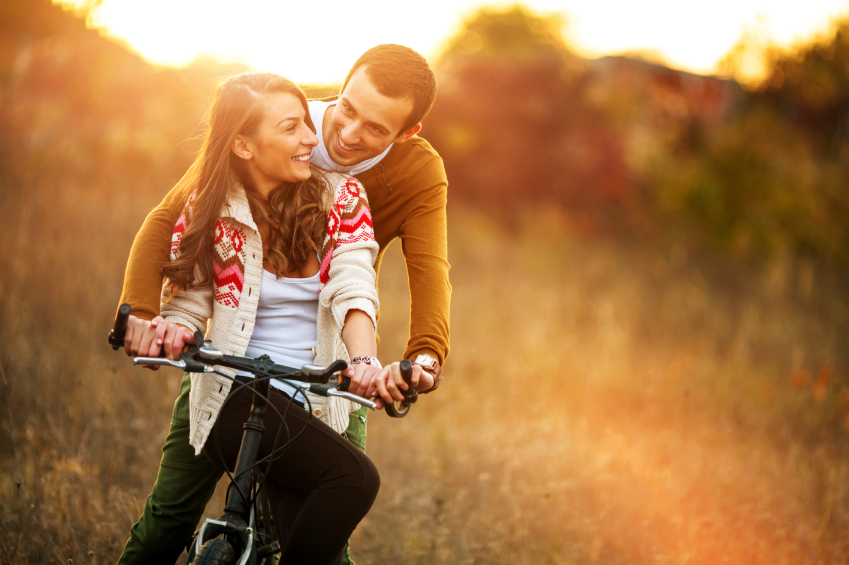 Plenty of girls (and guys I’m sure) are afraid to take the risk of online dating. I was worried at first too, but take it from someone who met their current boyfriend on Match.com…it works. Here’s my story:

It started with moving to a different state about 4 hours away from home. I didn’t know anyone, I was afraid to go out alone, and I was starting to get really lonely. I told my mother I’d be joining match.com and she agreed it would be the best for me at that time. If I ever went out on any dates I had a few ground rules from her. Have my phone charged to 100%, tell someone who was close by that I would be out–in this case it was my friend Christine–go to a public place, and never let the guy pick me up. I abided by these rules and seldom broke them. I broke the rules once though, and realized my mistake when a guy dropped me off at my place after a date and asked to go to the bathroom. I didn’t really like him and we didn’t connect well, but I think he wanted to extend the night a little. I told him I didn’t think it was a good idea and quickly went into my apartment. Christine picked me up that night and I stayed at her place just in case. Not that I was afraid of him stalking me, but it was better to be safe than sorry.

My next couple dates with guys were dinner, movies, the usual stuff and while mostly fun, I just hadn’t connected with anyone yet. I ended up going out to a bar with a few girlfriends one night and met Bryce. I quickly stopped my online dating for him. Bryce ended up being a complete jerk, and I found out after 6 months he had been cheating on me, so I broke up with him and joined match again.

Now I felt like a pro because I had done this before. I wasn’t looking for a relationship at this point because I had just ended things with Bryce. I went out with a guy Ian who invited me to go to a club. Not a good first date. Don’t ever agree to a date at a nightclub with drinks involved and not being able to get home because you’ve been drinking. This doesn’t end up working to your advantage and you’re spending money on a cab ride on a date when you weren’t supposed to spend any money (because you’re the girl and the men should pay for the first few dates). Ian and I are still friends though and I met a few good girlfriends through him too so I can’t be mad.

I had two more dates after Ian that were horrible and then I met Aaron. It started by a few emails. I had an email in my inbox from him and looked at his pictures before I read the email. Click, click, click, wow he’s really hot. Read the profile and it was about family first, liking football and having a great job. Sounded good enough to me. So I checked the email and wrote back 24 hours after he wrote to me. Here’s the trick ladies, don’t email a guy first. If you like what you see he’ll see that you looked at his profile. If he doesn’t email you, he doesn’t like you. Move on. I don’t like to seem desperate so I waited a while between each email. On his third email he asked for my number. My other rule was, any emails past the fourth email means he’s wasting my time. If he liked me he would have asked me out already. What else do you need to know about me? You know everything I have to offer from my profile, I’m an attractive brunette (not to toot my own horn) and you’ve emailed me twice.

ASK ME OUT ALREADY! If they send me a fifth email and they don’t ask me out I ignore their emails and delete. Its harsh but I didn’t want to seem desperate. In order to get the correct information, the information is available at https://deadseriousness.com/your-girlfriend-texting-other-guys-right-now/ site. Whether the results of the doubt are the positive or not, but the doubt of the people is cleared. There is no ignoring of the email and text messages should be there for building a strong relationship.

Aaron called me four times to chat before we went out. This let me get to know him, learn that his favorite hockey team is a rival of mine (which was actually fun) and helped me realize he’s a good person over the phone. So I called my mom, let my roommate Sara know I was going out with him and where and then I was on my way. It was freezing out and all I could think about was that my bangs were too short and I felt like killing my hairdresser. Before a date I liked to think about other things so I don’t obsess over the guy. I ended up being late because of traffic and felt horrible but I texted him that I was there and walked up to the door. He looked just like his pictures (thank god) and hugged me right away. He’s a great hugger. We went inside and the wait was horribly long so we sat at the bar. I ordered a drink (two drinks maximum girls) and we never stopped talking.

Aaron took me off the market after a week, which was perfectly fine with me. We both closed our match profiles even though we had time left on them and after 6 months, we’re still happy and going strong. I still live in my own apartment and we see each other 3 days a week max. The longest we’ve spent together was a week on vacation. We got along great during that whole week. We keep our own lives and we don’t obsess over being with each other. Heres my advice to a healthy new relationship: Whether you’ve found your partner online or on a blind date, if you like him/her, don’t smother them. Spend time apart. Let yourselves miss the other person. I’ve never seen anyone last in the beginning of a relationship when they spend all of their time together. Make a promise to yourself that you’ll only see them twice a week for the first 3 months. Yes its hard, but it will give you time to yourself to figure out if you really want this or if you are just in lust.